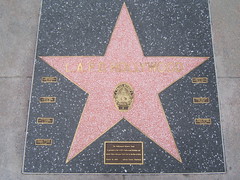 In a ceremony on March 10, seven Hollywood Area officers, killed in the line of duty, were recognized with a star on the Hollywood Walk of Fame.  The Walk of Fame, created in 1958, features about 2,500 stars.

"I can't think of a more fitting tribute to these fallen officers than to have their sacrifices memorialized at the entrance of the Walk of Fame." said Chief Bratton, who unveiled the Police Memoria Star with Hollywood Honorary Mayor Johnny Grant.  "Everyone who visits this great tourist Mecca will be reminded that within the galaxy of Hollywood Stars there is a special constellation."

Why were only seven officers recognized though?

wow... that is so awesome to read and see the pix. how very touching that the entrance has this "special constellation"!

as always, be safe!

The policemen that died in Hollywood had policeman badges,why does the police badge say police officer?

Bill Cymbalsky said, "...The policemen that died in Hollywood had policeman badges,why does the police badge say police officer?"

I think you know the answer, but I will state it anyway. At some point in LAPD's history, they changed the badge from "Policeman" to "Police Officer" in the wake of political correctness.

It would not be PC to put anything other than the "Police Officer" badge on the Walk of Fame.

There are "only" seven officers represented, as there have been seven Hollywood Division officers killed in the line of duty.

And of the seven, Heim and Rios had "Police Officer" badges, and off-duty Detective Kuster had a "Detective" badge. The other four had "Policeman" on their badges.

It was accuracy rather than "political correctness" that caused the badges to be changed in 1974, when female officers were allowed to apply for the same assignments as males. Both the former "Policeman" and "Policewoman" ranks and badges were replaced by "Police Officer."

As a resident of another country and close neighbour, I want to congratulate the communication efforts of the LAPD.

Communication and the way in which it is perceived, truly goes the distance in helping the general public better understand, what is truly, a difficult job.

There's a crime wave in the Miracle Mile area, near the Grove Mall, where gang members are holding up women returning home after parking their cars several blocks away from their residenes. Two questions:
1- Why isn't there expanded police presence in the area of the grove to arrest these criminals?
2 - Why doesn't the LAPD get creative and operate a "sting" to trap these maniacs in the course of their crimes? (Same with auto thefts - why not park a decoy vehicle with a Lojack device in it??)

i was wondering what is the procedure for writing up police reports? the reason i ask is that over time i have seen about 50 reports and have been witness to about a dozen situations and then have seen the report and in everyone of them the report did not state the true facts of what happened. then in court the officers read from the report as if it were the truth while under oath. which brings me to my next question how many officers have been charged with lying under oath in the past. thank you for your time and hopefully quick response

when they changed the wording on the badges from policeman to police officer, was that when you retired?