One of the Department's long-standing traditions, the command inspection, was conducted today at the Rampart Area station.  Sworn personnel stood at attention and were inspected up close and personal by Chief Bratton, Assistant Chief Earl Paysinger, Deputy Chief Lee Carter and Captain John Egan.  Rampart Area officers were unanimously commended on their appearance and level of fitness, as well as their overall success in reducing crime and gang activity in the area. 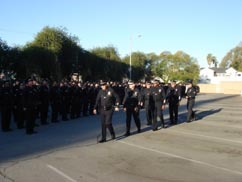 In addressing the 367 officers after the successful inspection, Chief Bratton spokeof the Area's astonishing comeback after the "stain" of the past having been recently, and permanently, removed.  He complimented the group of proud men and women for helping to bring about the "renaissance of Rampart" and restoring the Area to the "pinnacle of success" where they now find themselves.  He acknowledged that the pride of Rampart Area is visible and "second to none" and lauded the professionalism and deep camaraderie of the Area's personnel.

Among the standouts from this extraordinary group of men and women was Rampart Area Sergeant Mike Daly, who returned recently from a tour of duty in Iraq.  Sergeant Daly is one of many LAPD sworn personnel who has served in the Iraq war, and whom the Chief reminded all to honor and recognize for their dedication and commitment. 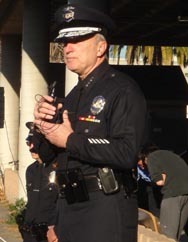 Assistant Chief Paysinger complimented Rampart Area officers for their efforts and acknowledged "the work done is obvious."  Deputy Chief Carter, a former Rampart detective, singled out the return of MacArthur Park to the community as a sterling example of how the Rampart Area is "all about serving the community."  Captain Egan bottom-lined it by stating the station "never looked better" and, in an emotional expression of his pride, assured the gathered officers the memory of this inspection would stay with him for the rest of his career.

At the end of the inspection, Chief Bratton presented 10-year pins to 4 officers in acknowledgement of their tenures.

I would agree that most of us viewed the Rampart scandal as a blight on our city. However, the people I've talked to who actually lived in that part of Los Angeles during those years are angry because they viewed the cops as being on their side.

Many left the area after CRASH went away, because they no longer felt safe in their own neighborhoods. There was a perception that the cops were only screwing with the bad guys.

Hey, when are you guys gonna take on MS 13. Hear they work for Al Queada. If not them then Hezbollah.
Don't get caught with your pants and skirts up folks, it makes the taxpaying voters look bad.