On June 7, 2007, at around 2:00 p.m., Gooden’s family members called detectives and told them Gooden was hospitalized for health reasons and no longer missing.  Gooden has been released from the hospital and is now home with her family.

She is described as a 54-year-old African American with black hair, brown eyes, 5 ' 2" and about 150 pounds. She was last seen wearing a turquoise suit with a multi colored print head scarf. Ms.Gooden suffers from a poor mental condition. Ms Gooden has been known to use a walker at times due to debilitating rheumatoid arthritis.

Anyone with information is asked to contact Detectives Lydia Dillard or Alan Gilmer, Missing Persons Unit, at 213-485-5381.

At a news conference today held inside the 77th Area Police Station, Chief Bratton and Mayor Villaraigosa announced the dramatic reduction in the city's homicide rate.  The numbers speak for themselves: 24% fewer murders and 32% fewer gang-related murders over the same period last year.  The Chief attributed the drop to a combination of resources, expertise, help from the community and the collaborative effort between LAPD and government agencies working together under the South Bureau Criminal Gang Homicide Group, established by Commander Pat Gannon.  The group of gang and homicide detectives works with 7 FBI agents, 2 Deputy District Attorneys, as well as City Attorneys and ATF agents to focus on solving murders, including gang murders and attempted murders in the South Bureau, the region of the city where the most gang-related murders occur.

Citing the latest homicide statistics, the Mayor remarked that Chief Bratton has his support.  He also referenced that, over the past five years, homicides citywide have decreased by more than 43% while gang-related homicides have decreased by 46%.  The Mayor stated the City is statistically as safe as it was 51 years ago, when he was 3 years old.

Commander Gannon addressed the media, and introduced family members of murder victims whose cases were still unsolved.  These family members made pleas to the community for help in solving the cases of their loved ones.  The young daughter of one victim was present and stood next to the Mayor, holding his hand during the conference.

The South Bureau Criminal Gang Homicide Group has cleared 84% of its total caseload thus far in 2007.  The Chief stated the next Bureau to receive a Homicide Group will be Central Bureau, which includes Newton and Hollenbeck Areas.

After the conference, members of the press were invited upstairs to tour the 77th Area Station Homicide Group's workspace. 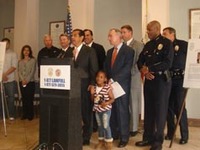 Los Angeles: Police are asking for the public's help in locating a suspect who earlier this month attempted to kidnap an 11-year-old girl from a golf course in the San Fernando Valley.

On Friday, May 18, 2007, around 7:15 p.m., the girl was playing on the north side of the Braemar Country Club Golf Course, near the maintenance yard, at 4001 Reseda Boulevard in Tarzana. The girl was in the company of friends but became separated from them. The suspect grabbed the girl and walked a short distance before letting her go and fleeing.

The suspect was a male Hispanic in his 30s, 5'8" tall, 130-150 pounds, with short brown hair, a goatee and a possible tattoo on his arm. He wore a dirty white or tan shirt and dirty jeans. He was a possible transient and had a strong offensive smell.

Police are making available an artist's rendering in the hope that a member of the public will recognize the suspect and call with whereabouts.

The investigation is being conducted by the Sex Unit of West Valley Area Detective Division. Anyone with information is asked to contact Detective Lawrence Concepcion at 818-374-7793, or Detective Ron Robbins, at 818-374-7812, during normal business hours. After hours and on weekends, please phone the 24-hour toll free Detective Information Desk at 1-877-LAW-FULL (529-3855).

Deputy Chief Hillmann has been a member of the Los Angeles Police Department since 1966.  He has held supervisory rank since 1976 and was assigned in the past as a Police Officer and Supervisor at Metropolitan Division, SWAT.

An overview of Deputy Chief Hillmann's background and history with the LAPD may be accessed online at www.lapdonline.org.

Los Angeles: Officers used a taser to subdue a man who led them on a car chase in East Los Angeles Friday. The man refused to surrender after he was stopped by police.

On May 25, 2007, shortly after midnight, officers were dispatched to a domestic violence call in the 1100 block of Calada Street in Boyle Heights. Police were told that Fernando Camacho, 30, had abducted his child and made threats toward a woman.

While officers were talking to the woman in her home, they saw Camacho drive past and attempted to detain him. Camacho refused to stop his vehicle and led police on a car chase that ended in the 3500 block of 7th Street.

Police stopped the vehicle and ordered Camacho to get out. After he refused to cooperate, a taser was used to subdue him. The suspect was taken into custody without further incident.

Camacho was taken to USC Medical Center where he was hospitalized for his injuries. He was later booked for making criminal threats.

Los Angeles: Today, the Los Angeles Police Department announces the activation of a Photo Red Light (PRL) system at the intersection of Whittier Boulevard and Lorena Street  This is the fourth activation within Operations-Central Bureau (17th in the City) with a new PRL monitoring system, which records vehicle license plates that run red lights.  In the near future, 15 additional locations will be outfitted with comparable machinery, totaling 32 intersections Citywide.

In June 2005, the City's PRL contract was not renewed after many years because of the poor quality of photographs.  In November 2005, the City Council approved the contract with a new vendor, Nestor Traffic Systems, Inc.  The new system is an improvement over the former system.

The dual-digital video camera system will record violators as they approach and travel through an intersection, after the light has changed to red.  The license plate will be photographed from the front and rear.  It is with the rear-facing camera that officers anticipate will increase the likelihood of convictions.

The digital video system will record 30 still frames per second for each violation, allowing a greater opportunity to get a clear photograph of the driver.

The new system has added features like the ability to monitor and adjust the equipment remotely via satellite.  It will also provide live photographs from the intersection during a breaking emergency.

A sergeant and four officers will be assigned full time to administer the program.  They will use a laptop computer in court to present the digital evidence during disputed cases.

Media inquiries regarding this system may be referred to Sergeant Matthew MacWillie, Traffic Coordination Section, at 213-847-1705.

A list of the current and former Photo Red Light intersections is available from Media Relations Section, upon request.

Los Angeles: A local gang member armed with a handgun was shot by police yesterday after he confronted officers.  The suspect's loaded .45 semi-automatic pistol was recovered at the scene.

The incident began on Monday, May 28, 2007 around 11:00 p.m., when officers on patrol in the area of 88th Place and Main Street saw Jamar Whitherspoon, 18, riding as a passenger on a "pocket-motorcycle." Whitherspoon was an Assault with a Deadly Weapon suspect, police said.

When Whitherspoon saw the officers, he jumped from the motorcycle and ran south on Main Street before trying to hop over a fence.

Whitherspoon was rushed by paramedics to California Hospital, where he later died.

Officer Bright is assigned to Southeast Division Gang Enforcement Detail and is a 10-year LAPD veteran.

No officers were injured in the incident.

Force Investigation Division responded to the scene and is handling the investigation.

Los Angeles: A man walking in the mid-Wilshire area of Los Angeles Monday evening was shot and killed by an unknown assailant(s).

On May 28, 2007, around 6:15 p.m., Mario Martinez, 18, of Los Angeles, was walking with his brother near the intersection of Washington Boulevard and Western Avenue. Several shots were heard and both victims fell to the ground. Martinez and his brother sustained multiple gunshot wounds and were rushed by paramedics to California Hospital. Martinez died at the hospital; his brother was admitted in critical condition.

No description of the suspect was available.  A vehicle seen driving from the area was described as black, possibly a Lincoln.

No motive for the crime is known.

Anyone with information is asked to call Wilshire Homicide Detective Holguin or Urena at 213-473-0446, during normal business hours. After hours and on weekends, phone the 24-hour toll free Detective Information Desk at 1-877-LAW-FULL (529-3855).

Notes from the May 29, 2007 Police Commission Weekly Meeting

•    Deputy Mayor Arif Alikhan and Councilmember Jack Weiss were present at today’s meeting, as were local electronic and print media.

•    Overall crime is down.  To date, there are 43 fewer homicides this year than there were last year.

•    The recruitment goal for this year is 731 total, but the expectation is to exceed this number.

•    The Department’s verbal status update and PowerPoint presentation, relative to the preliminary status report on the investigation of the events occurring at MacArthur Park on May 1, 2007 was given to the Commission.  Presenters included Chief Bratton, Deputy Chief Mark Perez, Commander Joan McNamara, Police Administrator Gerald Chaleff, Deputy Chief Michael Hillmann and First Assistant Chief Jim McDonnell.  This presentation will also be made to City Council on Wednesday, May 30, 2007.

•    The Department’s report, dated May 2, 2007, relative to a transmittal of the grant award agreement modification for the 2006/07 Selective Traffic Enforcement Program from the California Office of Traffic Safety, was approved.

•    The Department’s report, dated May 14, 2007, relative to a letter addressed to the Mayor seeking approval to extend the grant period and accept additional monies for the DNA Expansion Program, was approved.

•    The Department’s report, dated May 10, 2007, relative to an Amendment to the Warrant Applications and Supporting Affidavits Audit, Second Quarter, Fiscal Year 2006/2007, in accordance with the Annual Audit Plan, was approved.

•    The Department’s report, dated May 3, 2007, relative to the Annual Complaint Report for 2006 in accordance with Paragraph 130 of the Consent Decree, was continued one week.

•    The Department’s report, dated May 14, 2007, relative to the Discipline Report, First Quarter 2007, in accordance with Paragraph 88 of the Consent Decree, was approved.

•    The Department’s report, dated May 11, 2007, in response to Board request on the status of the City of Los Angeles Graffiti Rewards Program was approved.

•    The Department’s report, dated May 3, 2007, relative to the Adjudication of Categorical Use of Force Incidents - Completion of Training Status Report, was approved.

The Crime Task Force (CTF) – Motor Strike Team of the Los Angeles Police Department's  South Traffic Division, in support of the Los Angeles County's Avoid the 40 Program, conducted a sobriety checkpoint on Saturday, May 26, 2007, between the hours of 6:00 P.M. to 1:00 A.M.  The checkpoint was located at Crenshaw Boulevard between Slauson Avenue and 59th Street.  The officers screened drivers northbound on Crenshaw Boulevard from 59th Street.

This operation was conducted in an effort to reduce the incident of injuries, death, and property damage associated with the intoxicated driver at this location.  The intersection of Crenshaw Boulevard and Slauson Avenue was identified as one of the "Greatest Risk Intersections" in LAPDs' Operation-South Bureau.  The checkpoint served as a reminder to these South Los Angeles communities to use designated drivers and not drink and drive.

The Operation resulted in the following activity:

Funding for this checkpoint came from the California Office of Traffic Safety through the National Highway Traffic Safety Administration.  We can all help make our streets safer.  Report Drunk Drivers – Call 911.

If you have any questions, please contact Sergeant Arturo R. Gomez, South Traffic Division, Driving Under the Influence Enforcement Detail.  Sergeant Gomez can be contacted at 213-485-7336.