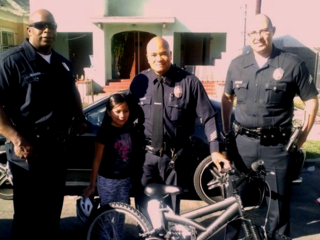 For as long as anyone can remember, bicycle theft has victimized children of all ages. As an all-too-common occurrence, it has certainly brought tears to the eyes of many a youngster. So when it happened last month to fourth-grader Ashley Sanchez of Celerity Dyad Charter School, her teacher noticed she was visibly depressed.

But little Ashley’s sadness was short lived thanks to Police Officer II Creighton Dawson, a Newton Division school liaison officer who was determined to lend a helping hand with the assistance of his partners, Police Officer III Tracy Marrufo and Police Officer II Robert Deamer. “We go to classes and speak to the students about various issues, such as bullying, drug use, staying in school, respect for teachers and police work,” says Officer Dawson. “I’ve done everything from reading storybooks to giving advice to a pregnant teen on breaking the news to her dad. It’s a very good program.”

In Ashley’s case, her teacher pitched in with Officer Dawson to purchase a new bicycle and safety helmet, along with a lock for better security, and and the items were presented to Ashley on March 6, 2015. Everyone, including the school’s principal, was very grateful. “I’d do it again in a heartbeat,” said Officer Dawson. “The look on Ashley’s face when she got that bike was worth every penny.”