The Los Angeles Police Department graduated 20 police officers on Friday, September 2, 2016.  The ceremony took place at the Police Headquarters Facility.  The graduating officers have completed 912 hours of training over the course of 24 weeks.

More than 500 guests attended the graduation ceremony.  Assistant Chief Michel Moore inspected and gave the class a warm welcome on behalf of Chief of Police Charlie Beck.  Assistant Chief Moore said, “Be proud of what you accomplished and bring honor to your family”.  Representatives of the Mayor’s office, the Board of Police Commissioners and Police Department command staff were in attendance, as well as their special guests and other dignitaries.

On Friday, August 5, 2016, the Los Angeles Police Department (LAPD) graduated 24 officers. These officers have completed 912 hours of rigorous training over the course of 24 weeks.  The graduation ceremony took place at the LAPD Administration Building Plaza and was attended by more than 500 family and community members.

“These officers represent the very best of the City of Angels,” said Assistant Chief Moore.  Assistant Chief Moore inspected the class along with the representatives of the Mayor’s office, the Board of Police Commissioners, Police Department command staff, as well as their special guests and other dignitaries.

Los Angeles: Willie L. Williams died on April 26, 2016 at 72 years of age. The 50th Chief of the Los Angeles Police Department passed away in Fayetteville, Georgia late last night according to Williams's family.

LAPD Chief of Police Charlie Beck eulogized, "I stand with a heavy heart after hearing the loss of our Former Chief Williams. He came at a time when the city was in great unrest and helped Los Angeles rebuild itself back into the great city it is today."

Born October 1, 1943, Williams was the first African-American to be appointed Chief of Police of the Los Angeles Police Department on June 30, 1992. Williams was seen as an official who restored confidence in the Department and the community after the Rodney King incident. During his time, he introduced the department's 'Mission Statement' which provided a renewed focus on service to our community.


Williams was a community policing advocate and co-wrote 'Take Back Our Streets; Fighting Crimes in America'. After leaving LAPD in 1997, Williams was later appointed as Federal Security Director for Hartsfield Atlanta International Airport in 2002.

Viewing services for Chief Williams will be held on Monday, May 2, 2016 at the Carl J. Mowell & Son Funeral Home located 180 Jeff Davis Drive, Fayetteville, Georgia from 6 p.m. to 8 p.m. Chief Williams will be then transported for funeral services in Philadelphia, Pennsylvania on May 7, 2016 at the Zion Baptist Church at 3600 North Broad Street. Viewing will be from 8 a.m. to 11 a.m. followed by funeral services at 11 a.m. The family has requested any donations in honor of Chief Williams be made to the American Cancer Society for the cure of pancreatic cancer in his name.

On Friday, April 15, 2016, the Los Angeles Police Department (LAPD) graduated 21 officers. These officers have completed 912 hours of rigorous training over the course of 24 weeks. The graduation ceremony took place at the LAPD Administration Building Plaza and was attended by more than 500 family and community members.

“They will do things no one should have to do,” said Chief Beck of the new officers. “They will depend on something and that something is you, the family.” Chief Beck inspected the class along with the representatives, the Board of Police Commissioners, Police Department command staff, as well as their special guests and other dignitaries. For Chief Becks’ address to the graduating class, please click on the link below.

On Friday, March 18, 2016, the Los Angeles Police Department (LAPD) graduated 28 officers. These officers have completed 920 hours of rigorous training over the course of 24 weeks.  The graduation ceremony took place at the LAPD Administration Building Plaza and was attended by more than 500 family and community members.

Joining the group will be Department of Justice officials from the United States Attorney's Office, the Bureau of Justice Assistance, the Office of Juvenile Justice and Delinquency Prevention, the COPS Office, and the Bureau of Alcohol, Tobacco, Firearms, and Explosives.

Chief Beck said in preparation for his annual conference "law enforcement agencies should collaborate with community members to develop policies and strategies, build trust, create partnerships, listen to the community, and then work together to make those things happen."

One of the key purposes of the VRN visit is to hear and see the evidence-based programs of the LAPD. The agenda includes remarks from The Honorable Mayor Eric Garcetti, Chief Beck discussing "Trust and Effectiveness as Measures of a Police Department", the success of the data driven policing strategies of "LASER" and "Predpol" (predictive policing), the value of Community Surveys, Body Worn Video, Community Engagement, Media Relations, COMPSTAT, Building Public Trust, among other classes and demonstrations.

In addition to Department personnel facilitating and instructing, Chief Beck has also invited outside experts to impart their unique knowledge. Inspector Andre Ramsey of the London Metropolitan Police will provide a keynote address on Community Surveys and Predictive Analytics, Dr. Jeff Brantingham will instruct the value of Predictive Policing, Dr. Craig Uchida will present findings from Justice and Security Strategies, and LASD Sheriff Jim McDonnell will give an overview for the conference.

Recently, I had to make a difficult decision. After months of investigation and thorough review, I made the determination that one of our officer involved shootings was not only not up to our Department standards, but was also a violation of criminal law. And because of that I recommended to the District Attorney that she file criminal charges on one of our police officers. I don't do this lightly. And the vast majority of the time, as you well know, I stand up for you regardless of public opinion. But in this case, I had to call it like I saw it. I had to do the right thing. I expect you to do it and I demand for myself that I do it. Know that I believe in you. Know that I believe in this police department. Know that when we are right, I will always be there. But when we are wrong, I have to say it.

There have been far too many tragic reminders illustrating why it is so important that the Department continue to work tirelessly to maintain our readiness in order to keep our City safe. The Department has exercised extraordinary tactical planning by assigning more than 200 police officers and configuring them into Direct Action Teams. Officers were integrated with special assault weapons, armor, bomb technicians, hazard materials technicians, and command and control operations utilizing a Tactical Operations Center. Additional capabilities were exercised to include Aerial Platform Shooting (APS), Active Shooter, Bomb Device Disruption, Incident Command, Unified Command, and Area Command organizational structure.

Counter Terrorism and Special Operations Bureau, led by Deputy Chief Michael Downing, has four objectives. The first objective is preventing terrorism by reducing the motivation, solicitation, and support of terrorist ideology. The second objective is to actively pursue terrorists and the organizations that support them. The third objective is preparing our citizenry and local government for the consequences and recovery associated with a terrorist attack. The fourth objective is to protect the region through the continued development of sophisticated specialized tactical resources and response capabilities. I want to thank our personnel who continue to work hard and train hard in order to insure the safety of those we protect and serve.

I wish the best of luck to all runners. Some of you will enjoy this challenge for the first time while others of you have returned year after year to represent our Department with pride. The training and commitment to compete in Baker to Vegas requires dedication and perseverance. This challenging competition is part of law enforcement history. Each of you serve as a proud representative of the LAPD as you compete against law enforcement agencies from around the world. A very special thank you to the support teams, event organizers, and alternate runners as they assist and encourage the runners through the desert, over the mountains, and to the finish line in Las Vegas. I look forward to being there with you to celebrate your accomplishments.

Thank you for all you do. 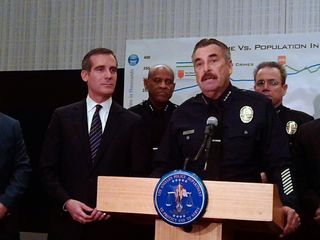 Washington DC: Today, Los Angeles Police Chief Charlie Beck joined President Obama and Bill Keller, Editor-in-Chief of The Marshall Project, for a conversation on criminal justice reform with US Attorney John Walsh from Colorado. The focus of the discussion was how to make America's law enforcement and correctional practices more just and effective.

Said Los Angeles Mayor Eric Garcetti, "There is an important and necessary national conversation happening right now about use-of-force and the role of police, especially in communities of color.

Though L.A. has a painful history and still experiences difficult moments today, we have taken extraordinary steps to break from the past - and our achievements and commitment to continuing progress have earned our city a place among America's leaders in 21st century policing and criminal justice reform. That is affirmed by Chief Beck's conversation with President Obama today at the White House, as they discuss ways that America's law enforcement and correctional practices can be made fairer and more effective.

Cities across the nation can find transformative lessons in L.A.'s story - as we deepen our police department's relationships with the communities they serve, emphasize de-escalation tactics and transparency through what will be the nation's largest body-camera program, and provide pathways to second chances for nonviolent offenders instead of pipelines to prison."

Said LAPD Chief Charlie Beck, "We have to recognize that all crimes do not carry the same weight and some crimes involve addiction and mental illness and have other pathways that can be more effective than incarceration. We are a reflection of a much larger issue in America. There is racial disparity in housing, in employment, in the entire economic system… We have to look at these things in totality and address them as a nation."

The Los Angeles Police Department has embraced the recommendations from the President's Task Force on 21st Century Policing Interim Report released earlier this year. A key pillar of the Interim Report pertains to developing policy and oversight with regard to Police Training and Education. This summer, Chief Beck unveiled a five-hour block of training to every field officer in the LAPD on the topic of reverence for life. The training utilized historical reference points including the 1992 Riots and the Rampart Corruption Scandal, as well as national use of force incidents to highlight key transformational moments in the department's history. The course included a block on building our capacity to engage the mentally ill. Officers took away the reminder that reverence for all life is the cornerstone to constitutional policing.

Chief Beck addressed a second pillar of the report - Community Policing and Crime Reduction - through continued growth of the Cadet program, establishing an LAPD Headquarters Cadet Post in order to recognize the voice of youth in community decision-making. The Department is also spearheading a Juvenile Arrest Diversion Program in Operations-South Bureau designed to keep first time offenders from jail time through social engagement, education, and job training.

The panel discussion at the White House was live-streamed at 2:00 PM Eastern Time Thursday. It can be viewed at The Marshall Project and Yahoo.