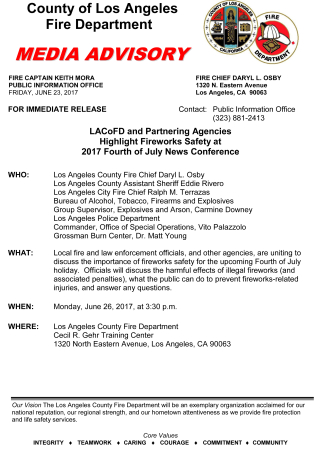 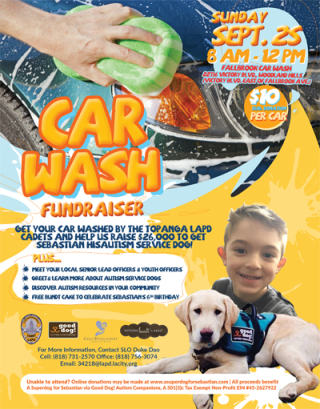 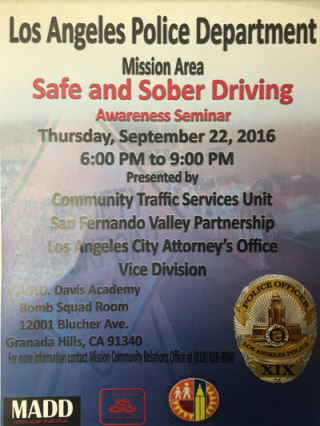 LOS ANGELES — Black-and-whites can also be green. The Los Angeles Police Department today added 100 electric cars (EVs) to its fleet, making L.A. a national leader in the move to cleaner and quieter vehicles. 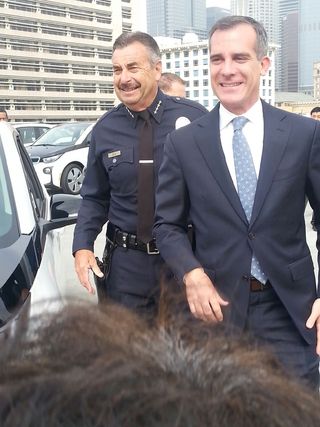 The new arrivals bring the City’s total number of EVs to 168, giving Los Angeles the largest fully battery-powered municipal fleet in the United States. In the most aggressive such policy of any city or state in the U.S., Mayor Garcetti’s Sustainable City Plan requires that at least half of all new City vehicles be electric.

“Every sector should be migrating to green technology — and these new EVs show how local government can lead,” said Mayor Garcetti. “Our sustainability plan pushes L.A. to speed adoption of greener practices and technologies, which also save money and resources. If LAPD can do it, so can everyone else.”

The move helps the bottom line. Electric vehicles cost less to maintain and fuel, and the deal includes maintenance as well as training and certification of LAPD mechanics on electric vehicles. By opting to lease instead of purchase the 100 EVs, LAPD also was able to buy and install 104 charging stations.

“Electric vehicle procurement made sense for taxpayers and for the environment,” said LAPD Chief Charlie Beck. “The charging stations we bought will power many more electric vehicles in the future, for much less than the price of gas. Every dollar we save from lower maintenance will go back into law enforcement to keep our city safe. And while our new electric cars will be used only for non-emergency purposes, we will continue to monitor and test new generations of vehicles for their potential to serve as patrol cars.”

The new arrivals give LAPD the largest pure EV fleet of any police force in the country.

LAPD chose BMW i3 cars after a competitive bid, opting for a three-year lease to retain flexibility to change the fleet as EV technology evolves.

With the lease, LAPD was able to replace 100 aging vehicles instead of the original 36. 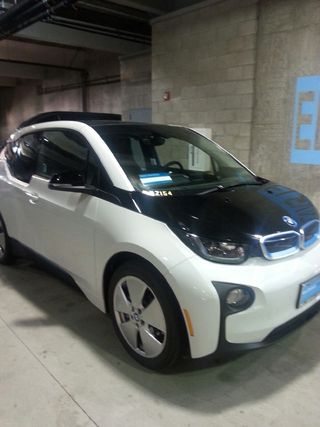 The department obtained permission from City Council to redirect $1.5 million earmarked for buying EVs to the purchase and installation of 104 charging stations, including 4 DC fast chargers capable of restoring a full charge in less than an hour.

The new EVs will be part LAPD’s motor pool, which is largely used by the civilian work force for meetings or site visits, as well as by sworn officers on routine 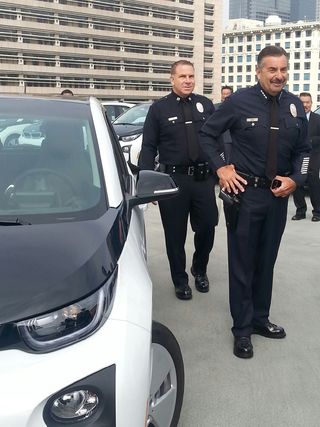 By leading through example on EV procurement, Los Angeles and the City hope to move the EV market towards lower costs and greater investment into viable medium and heavy duty EVs, a critical portion of the City’s fleet for many departments. The lease also will reduce the City’s dependence on a gasoline, a highly volatile commodity.

Los Angeles leads in electric transportation in other ways. The City recently passed its 2017 goal of 1,000 publicly available EV charging stations, giving it the most of any city in the United States.

Our lives can change for better or worse in an instant, a perfect example of which occurred recently at the California Chicken Café in West Hills when a patron suddenly began choking.

Unable to breathe, the patron hunched over his table while his alarmed wife and son witnessed the ordeal. As his wife began calling 911, others passed by without offering any help until Topanga Area Police Officer III Mark Mireles sprang into action. Officer Mireles was on his lunch break.

The choking man’s wife motioned for him to come to their table. “It was evident that his airway was obstructed.” said Officer Mireles. “He couldn’t even make a sound. I knew I had seconds to act.” Without a moment’s hesitation, Officer Mireles asked his partner to call 911 and began performing the Heimlich maneuver on the man. After several thrusts, it appeared the man’s airway had cleared, and Officer Mireles stayed with the man and his family till paramedics arrived.

Coincidentally, 48-year-old Officer Mireles had undergone first aid training just weeks before the incident, but he claims he was merely doing his job when he very well may have saved the man’s life. Nor does he consider himself a hero, even though he has been honored with three Medals of Valor during his 25 years with the Department.

One thing for sure…Officer Mireles hopes the incident will motivate people to become familiar with life-saving techniques like the Heimlich maneuver because one never knows when such knowledge will come in handy or literally mean the difference between life and death.

On the evening of June 25, 2015, 10 “outstanding” fathers were honored at an occasion  organizers hope will become an annual event.  All honorees were from the Ramona Gardens community and nominated by the Ramona Gardens Resident Advisory Council.

Three organizations collaborated to make the event possible: Hollenbeck Community Safety Partnership, Ramona Gardens Resident Advisory Council and the Housing Authority of the City of Los Angeles (HACLA).  “I wanted to make sure these fathers were recognized,” said Sergeant Ken Edwards of the Hollenbeck Division’s Community Relations Office.  “It was a simple gesture, but it meant a lot.”

The 10 fathers were presented with an achievement award and a voucher for Dodgers tickets.  They were also treated to a dinner courtesy of HACLA.  A similar event occurred this past Mother’s Day in which winning moms got a makeover, flowers and dinner.

“This community was forgotten,” said one of the fathers, “and now it’s nice to be appreciated and recognized by this community for doing the right thing.”

On June 24, 2015, scholarships were officially bestowed upon 27 outstanding students, including four from the Ramona Gardens housing development. For the past 12 years, the Housing Authority of the City of Los Angeles has sponsored the annual scholarships, but beginning in 2014, the Hollenbeck Community Safety Partnership program joined the effort and began contributing funds.

To be eligible, students had to submit an essay explaining why they should receive a scholarship, and this year’s recipient group was the largest ever. Many of the students have already been accepted to four-year universities.

Selling cookies had a big payoff for 12 Girl Scouts from the Ramona Gardens Girl Scout Troop #431. Proceeds from the cookie sales paid for a field trip on June 25, 2015, to Disney California Adventure Park.

Some of the girls were visiting the park for the first time. The event would not have been possible without the help of two senior lead officers from the Hollenbeck Community Safety Partnership program who chaperoned the outing, Officers Mishell Harvey-Dixon and Cesar Wences.

Officer Harvey-Dixon appears in front of the girls in the photo.

In his eight years of existence, Noah Cohen has endured more surgeries and medical conditions than most people experience in a lifetime due to an inborn, rare condition called VACTERYL association. But on April 23, 2015, Noah temporarily escaped his medical hardships when the LAPD and LAFD partnered with the Make-A-Wish Foundation to make Noah’s dream come true: living the excitement of being a Los Angeles police officer or firefighter.

A limousine provided by the foundation transported Noah to his fun-filled destinations. Included in the festivities was an adventure at the Department’s Davis Training Facility where he enjoyed a wild ride in a patrol car. Also included was a visit to Los Angeles International Airport’s Flight Path Learning Center and the Elysian Park Police Academy for a ride-along in a special weapons and tactics armored vehicle…pretty exciting stuff for just about any youngster. His one-of-a-kind day culminated with a thrilling ride in an LAPD helicopter.

All who came into contact with Noah that day were moved and inspired by his display of jubilance in the face of his life-threatening condition. It’s sure to be an event that will live forever in Noah’s memory and the memories of those who helped make it come true.

A short video featuring Noah's highlights can be viewed here-->  <--.