Notes from the May 6, 2014 Weekly Police Commission Meeting

Police Commission President Steve Soboroff, began by dedicating the meeting to and with a moment of silence for Officer Roberto Sanchez, who was killed in a traffic collision while on duty in the Harbor Area, and Officer George Nagata who passed away from a heart attack. President Soboroff announced the private service for Officer George Nagata will be Tuesday May 13, and the services for Officer Roberto Sanchez will be Wednesday May 14. President Soboroff welcomed members of the Domestic Violence Task Force to the meeting saying he appreciated their presence and asked them to speak during public comment.

Commissioner Robert M. Saltzman said he will be attending with Commissioner Kathleen Kim the quarterly Lesbian, Gay, Bisexual, Transgender and Questioning (LGBTQ) Community Forum scheduled for tonight and will provide a report at next week’s police commission meeting. Commissioner Saltzman added he did not want to comment on the jury verdict of a lawsuit against the Department and wanted to assure the Police Commission and the Department that he and Commissioner Kim will form a subcommittee to review and closely monitor the litigation and will be playing close attention to this matter. He said the Police Commission has wanted to focus on risk management on employee litigation and is looking forward to seeing progress in this area.

Chief of Police Charlie Beck said the Department strongly but respectfully disagrees with the jury’s verdict in the case discussed by Commissioner Saltzman regarding at-will employees who were recruits in the police academy and their right to work. Chief Beck has discussed this matter with Mike Feuer, City Attorney, and both agree they will do everything in their power to overthrow the verdict.  He said it was a very sad weekend for the Department with the loss of Officer Roberto Sanchez, who was killed in a traffic collision while on duty in the Harbor Area, and Officer George Nagata who passed away from a heart attack. Chief Beck said the services for Officer George Nagata will be Tuesday May 13, and the funeral for Officer Roberto Sanchez will be Wednesday May 14, at the Cathedral of Our Lady Queen of Angels. Chief Beck invited everyone to attend the Police Memorial Ceremony in front of Department headquarters on Thursday May 8, 2014, at 10 a.m. The ceremony will honor the 207 fallen officers who have made the ultimate sacrifice in the 146 year history of the LAPD.

Department’s verbal update and discussion relative to the status of the field test of the On-body Camera Project was presented by Maggie Goodrich, Chief Information Officer, and Sergeant Dan Gomez, Tactical Technology Section.

Department’s Report, dated May 1, 2014, relative to City Council Motion relative to creating a Deputy Chief of Traffic Enforcement Position, as set forth, was approved and transmitted to Public Safety Committee.

Department’s Report, dated May 2, 2014, relative to the request for authority to destroy obsolete original records for Valley Jail Division, as set forth, was approved and transmitted to the City Clerk, Records Management Officer.

Department’s Report, dated May 1, 2014, relative to the Recommendation for the Medal of Valor, as set forth, was approved.

Proceeds from the February 13, 2008, Burger King Restaurant fundraiser were presented to the family of fallen Los Angeles Police Department Officer Randal Simmons, who tragically lost his life in the line of duty in the early hours of Thursday, February 7, 2008, when he and his SWAT team members responded to a call of an armed suspect barricaded inside a residence.

Chief William Bratton thanked Burger King for its generosity on behalf of the Department.  He noted that the Cimmarustis have a long history of supporting and fundraising for the LAPD.  Two years ago they held this same fundraiser for Officer Landon Dorris, Northeast Area, who was killed in the line of duty when he was struck by a vehicle while investigating a minor traffic collision.

Thank You to the Community

The men and women of the Los Angeles Police Department and in particular the Metropolitan Division, wish to extend our deepest and most humble appreciation to the Los Angeles Community for its overwhelming support during our time of great loss. As you all know, our Metro Division brother officer, Randy Simmons, was a truly amazing human being. His death is an enormous loss to the entire community. It is due to your support that we are able to continue doing our jobs in a manner that will make Randy proud.

Your phone calls, letters, flowers, and donations for the Simmons and Veenstra families, has been truly incredible. There really are no words to describe your generosity and compassion, but it will certainly never be forgotten. Your show of support while lining the streets of Los Angeles as we traveled to Randy’s final place of rest, was truly an awesome and breathtaking sight. Thank you for taking the time out of your busy day to be there for us. It means more than you will ever know.

We are honored to serve the residents of Los Angeles. Please know that we are always here for you as you have always been there for us.

Shortly, after 9:00 last night, the Los Angeles Police Department's Communications Division received a 911 call from a home in West Valley in the 19000 block of Welby Way.  The caller indicated he had killed 3 of his family members.  West Valley Patrol Units responded to conduct an investigation.

The suspect refused to leave the home and LAPD SWAT was called to the scene. 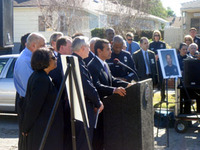 Around 12:30 this morning, SWAT made entry into the home and an exchange of gunfire between the officers and the suspect occurred.  Two veteran SWAT officers were shot, removed from the home and rushed to Northridge Medical Center.  The incident at the home in West Valley is still ongoing, and for that reason there will be no more tactical information released at this time.

Despite the efforts of the Los Angeles Fire Department and hospital personnel, one of the officers passed away just after one'clock this morning.  The other officer was seriously wounded but will survive.  The names of the officers will not be 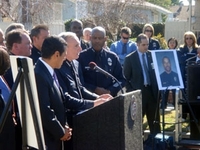 released until all of their family members have been notified.

The members of the Los Angeles Police Department are deeply saddened this morning having lost a member of their family.  Our hearts and prayers go out to the families of these two brave officers.  Both have served this city for more than 25-years and have been a part of SWAT for 20 of those years. 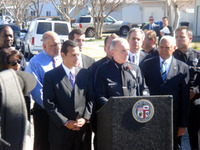 The concept of SWAT originated in the late 1960s, and became fully operational in 1971 when personnel were assigned on a full-time basis to Metropolitan Division.  Until this morning, no SWAT officer had been killed in the line of duty despite thousands of incidents this elite unit has responded to in thirty plus years.  The only other SWAT Officer to have died on duty was Officer Lou Villalobos, who died during a training accident in March 2000.