Thursday, June 15, 2017 - Los Angeles Police Department’s Chief Charlie Beck spoke to the press regarding the ongoing investigation of unaccounted for police vehicles that resulted in a pursuit last night. Chief Beck also commented he will join Mayor Eric Garcetti tonight and as they light the bat-signal in honor of beloved Batman TV series star Adam West. The news conference was held in the COMPSTAT room of the Police Administration building.

podcast
Thursday January 24, 2013 - LAPD’s Valley Traffic Division (VTD) honored 7 of their fallen heroes with a ceremony that brought retired officers, elected officials, and command staff under one tent on a rainy afternoon. The ceremony was a reunion of family, friends, and former patrol partners assigned to VTD. 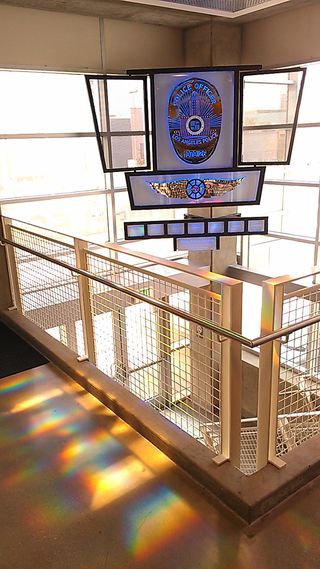 Chief Beck was on hand for the ceremony that ended with the unveiling of the Fallen Officer Memorial, an artistic monument that stands 20 feet tall located in the main lobby/front desk of VTD.  Incorporated in the monument are glass squares with an inscription of each fallen officer’s name.

Officer Chad Bigley with artist Tim Lampros presented Chief Beck with a metal LAPD badge art piece for the Chief's office.  Also recognized at the ceremony was Captain Ivan Minsal who was presented an appreciation art piece by Officer Bryce Verna, Tim Lampros and the Valley Traffic Advisory Council.  Councilmember Dennis P. Zine presented VTD a recognition certificate for their efforts in honoring the men and women who sacrificed their lives.

Posted at 10:24 AM in Public Information Office | Permalink | Comments (0)

Eat, Play and Shop Local.  Be part of the success, and use alternate transportation

The LAPD would like to remind everyone to plan ahead and avoid the 405 Freeway the weekend of September 29th and 30th.  A 10-mile portion of the 405 Freeway will be closed between the 101 Freeway and the 10 Freeway in all directions during beginning Friday night at midnight and will remain closed until Monday morning at 5:00 a.m.  The closure is due to the demolition of the northern half of the Mulholland Bridge.

We are encouraging the public to make plans to stay local during the closure weekend and Eat, Play and Shop in your local area.  Make this the weekend to walk, bike and use public transportation to avoid the need to drive around the impacted area.

Last year’s closure success was due to the cooperation of the public who made the effort to avoid the closure area.  This year will also be a success if everyone does their part.

Thank you for being part of the solution.

Posted at 10:12 AM in Public Information Office | Permalink | Comments (0)

Avoid the 405, Eat, Play and Shop Local.  Be part of the success, and use alternate transportation

The LAPD would like to remind everyone to plan ahead and avoid the 405 Freeway the weekend of September 29th and 30th.  A 10-mile portion of the 405 Freeway will be closed between the 101 Freeway and the 10 Freeway in all directions during beginning Friday night at midnight and will remain closed until Monday morning at 5:00 a.m.  The closure is due to the demolition of the northern half of the Mulholland Bridge.

We are encouraging the public to make plans to stay local during the closure weekend and Eat, Play and Shop in your local area.  Make this the weekend to walk, bike and use public transportation to avoid the need to drive around the impacted area.

Last year’s closure success was due to the cooperation of the public who made the effort to avoid the closure area.  This year will also be a success if everyone does their part.

Thank you for being part of the solution.

Los Angeles:  Los Angeles Police Department (LAPD) Central Traffic Division detectives are asking for the public’s help with providing any information that will lead to the arrest of person responsible for a tragic traffic collision that seriously injured a 59-year-old female victim in South Los Angeles.

On August 11, 2011 at about 8:40 a.m., Irma Rodriguez was standing behind her vehicle, which was stopped on Long Beach Avenue and north of 40th Place, when the incident occurred.  An unknown vehicle traveling northbound Long Beach Avenue struck the victim from behind.

After hitting the victim, the driver failed to stop to render aid and identify themselves as required by law.  The hit-and-run vehicle fled the scene leaving the injured pedestrian in serious condition, which ultimately caused the amputation of her legs.

The Los Angeles city Council approved a reward of $50,000 for information leading to the arrest and conviction of the person responsible for this vicious crime.

Anyone with information about this crime is urged to call Central Traffic detectives at 213-972-1840.  During non-business hours or on weekends, calls should be directed to 1-877-LAPD-24-7.   Anyone wishing to remain anonymous should call Crimestoppers at 1-800-222-TIPS (800-222-8477).  Tipsters may also contact Crimestoppers by texting to phone number 274637 (C-R-I-M-E-S on most keypads) with a cell phone.  All text messages should begin with the letters “LAPD.” Tipsters may also go to LAPDOnline.org, click on "webtips" and follow the prompts.

April 22, 2010 - In a test of endurance, speed, agility, and toughness, the Toughest Cadet Alive competition was held on the campus of James Monroe High School.  The physical abilities challenge pits students from the seven Department Magnet schools against each other in a day long competition.  The schools included were Monroe, Reseda, Dorsey, San Pedro, and Wilson High Schools along with Mulholland and Burbank Middle Schools, with Burbank Middle School being new to the program this year.

Students competed in strength events such as pull-ups/chin-ups, push-ups and sit-ups; endurance events such as jump rope, the mile run and the obstacle course;

and a speed event in the 100-yard dash.  Participants also had to show academic excellence in their classes and compose an essay in order to participate.  Winners are awarded medals for individual and team performance and the student with the highest average score is awarded with the envious title of Toughest Cadet Alive.

The Los Angeles Police Department would like to congratulate the Monroe High School Police Academy Magnet Cadets on their victory and thank all the participants in this year’s Toughest Cadet Alive competition.

Posted at 07:37 AM in Public Information Office | Permalink | Comments (1)

The holiday season is a chance for us all to reflect on the year and be thankful for being able to see another come to pass.  As the Senior Lead Officer for half of the Skid Row area, there are many things that I can look back on this year and feel a sense gratitude for.  One of the things I am thankful for is the continuing reduction in crime in the Skid Row community thanks to Safer Cities Initiative (SCI).  I was glad to be a part of the SCI unit for the past seven months, which gave me a deeper respect for the dedication of the officers and leadership that is assigned there.  I am grateful to be able to drive down Skid Row streets that I survey, and see far less people suffering from the aftermath of Skid Row violence.  I am especially thankful to the Skid Row community for opening their hearts and minds to me over the last four years.  I am ever encouraged by the solid relationships that I have formed over my time in Skid Row with the wonderful community I serve.  Many thanks go out to the Skid Row community members who boldly brushed aside their fears and reported crime and crime trends to me.  Just a few short years ago, a rational fear of retaliation from the criminal element deterred many Skid Row citizens from reporting crimes either committed against them or to others.  As the community has become safer, community members and their involvement in crime reduction have become more common place in spite of efforts to derail the SCI, and demonize the officers involved with it.

For the many that came to the Skid Row walks to see Skid Row for themselves and talk to the people, rather than simply reading about it and forming an opinion of our efforts, I truly thank you for having an open mind.  I look forward to walking and talking with many more individuals in an effort for all to remove their judgmental ideals of what being homeless in Skid Row truly is.

I fully expect to continue in these gains well on into the next year.  By working together, I believe that this place we call Skid Row will truly become a place of rehabilitation for those in need of it.  You are always in my thoughts. 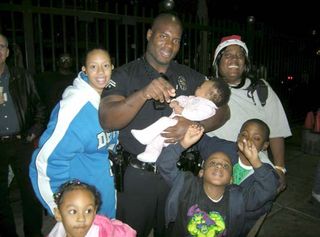 I would like to take the time to honor the members of the Skid Row community who lost their lives this year.  Our thoughts go out to the families, co-workers and friends of the following individuals for their loss:

To the friends and family, you have my deepest condolences and are in my prayers.

November 19, 2009 – In a small ceremony held in front of the Police Memorial at the new Police Administration Building, Commander Paul Gillen was memorialized for his service and sacrifice to the Department and City.

Family members including Commander Gillen’s wife Margie, dignitaries, active and retired personnel and invited guests watched as Assistant Commanding Officer of Special Operations Bureau, Commander Scott Kroeber unveiled the portrait of Commander Gillen which will be permanently displayed in the new Police Administration Building.  Police Chief Charlie Beck also presented Commander Gillen’s widow with the Purple Heart which is awarded to officers who are wounded or killed in the line of duty.  The ceremony also included a helicopter flyover and a wreath laying at the Memorial.

On May 29, 1974, Commander Paul Gillen was killed in a Department helicopter crash.  Commander Gillen was the commanding officer of Uniformed Services Group, and at the time of the crash, he was on board an aircraft that was involved in SWAT training.

Posted at 11:56 AM in Public Information Office | Permalink | Comments (1)

On Monday November 9, four Police Academy Magnet cadets, Officer Joel Frias, Alise Cayen and three members of a non-profit organization called TKO (Turning Kindness On) loaded crates full of children’s book up in a police van and headed out to Van Nuys Division.  It was an event that had been in the works since Alise Cayen, Reseda’s Police Academy Magnet Coordinator saw Topanga Division’s children’s room first hand at their grand opening ceremony.

Ms. Cayen was so in awe over the room’s aesthetics and so moved by the story behind the mural that it was at that event that she promised to donate a copy of a her children’s book to each Valley Division’s juvenile soft room before my book had even been released. Soon after the Ella Fitzgerald Foundation found out about her book donation plan, they joined in; donating more than 300 additional books and suddenly, the police academy had crates full of books for every Valley Bureau’s children’s room, which their cadets artistically decorated.

Ms. Cayen wanted to learn more about these rooms and more importantly, she wanted the experience to be a teachable moment for her cadets. Ms. Cayen and Officer Frias took four of their cadet leaders and representatives from the TKO Organization along to learn more about each station’s children’s rooms and give them crates full of books.  With the support of all the Valley Bureau Captains and detectives, they were able to hit every Valley Division, meeting the captains in charge, touring each room and taking photos. It was a very rewarding day that was a learning experience for everyone involved.

The TKO Organization would like to pursue efforts to raise money so that every station can have a mural and more resources to make their juvenile soft rooms more pleasant for the young kids who use them.

Posted at 09:36 AM in Public Information Office | Permalink | Comments (0)